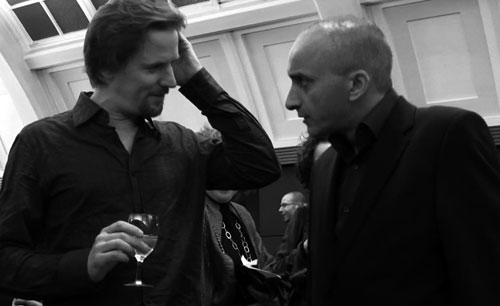 Michael Nath’s novel La Rochelle was unveiled at a private launch event at the University of Westminster’s Regent Street site last night. A hundred or so gathered to hear Michael talk and read a little from the book, then retired to a crowded upstairs room at the nearby – and highly fitting – Green Man pub for food and drink. It was a splendid occasion.

I’ve been working with Michael on the book for nearly three years, so it was a big moment to reveal it last night. In three years of anyone’s life, there are certain moments and experiences that bring about personal change. I’ve had several such moments in this time. What has been remarkable about La Rochelle is that after each shift, when I’ve returned to work on the manuscript, certain passages have shone out at me in a surprisingly new way, so new it was as though I hadn’t even read them before. The text had a profound impact, directly linked to the experience I had just had. There is a maxim that when a reader picks up a book the question they ask of it is to ‘tell me about me’. There are very few books that have taught me as much about myself as La Rochelle.

In one session held here at Route HQ about eighteen months ago, we’d been working on the text all day. It was late at night and we were smoking cigarettes; relaxing after a long hard day of deconstructing and reconstructing the manuscript.

‘I’ve been asked to make a short presentation,’ I told him. ‘The subject is “What is great art?”. I think they might have got the wrong man.’

He began to shuffle in his seat and draw deeply on his cigarette.

I could see that he was excited by the idea, in many ways this was a subject which was much closer to his line of work than it was to mine – he’s a lecturer in modernist literature. The introduction of the presentation gave us the opportunity to turn the tables and for him to edit my ideas for a change, following a heavy day of me editing his.

‘You know what it is though, don’t you Ian?’

‘Think about what you’ve been telling me all day and simply say that,’ he offered as he stood to continue with his suggestion.

‘Say that great art has to work on two levels. Firstly, it has to work on the surface. It has to offer immediate satisfaction, draw you in and give you something there and then. Secondly, it has to work on a deeper level and continue to work again and again. You must be able to revisit it and it needs to work just as well, if not better, on the second, third, fourth time of asking. It must last.’

He cited the reading of Hamlet as a prime example.

After living with La Rochelle over these years and reading through it on what must be more than twenty occasions in great detail, I can report that this book is another prime example. On reading through, the book’s wit is likely to make you laugh out loud, but underneath it is working away in layers at a deeper, profound level. The recent improvement in my physical health can be attributed in part to this text. If it were only that that I should thank this book for, then that would be more than enough.

If you are one of the many who grumble at the lack of adventure in modern publishing, then I highly recommend you take a look at La Rochelle.