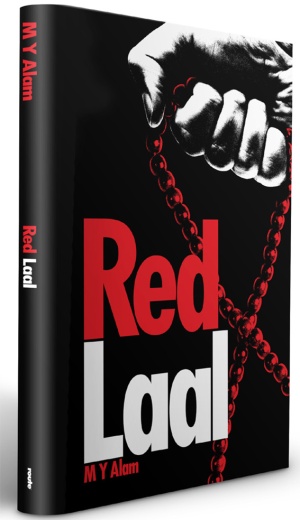 ‘Red Laal is a real rough guide to Bradford, an unflinching look at the city’s criminal hinterland, but then MY Alam isn’t in the business of tourism. Every city has its underworld, and Bradford is no different. Red Laal is a smart, tough and authentic revenge thriller best served cold, and marks out M Y Alam as a major name in gritty, contemporary gangster-culture crime writing. It might be a little early in Alam’s career to say he’s the Bradfordian version of Elmore Leonard, but given a few more novels of this quality, at this pace and in this vein, then who knows?’ – Bradford T&A

‘Red Laal is a fine novel, a story that absolutely races along and grips like a vice. Sometimes it feels as though you can touch the fabric of the world Alam has created.’ – Yorkshire Post

For a limited period, Red Laal is just £3.60 for Kindle. Click here to order.

Also available in Hardback. Click here for more details on the book and to order.

‘Another gangster with all the presence of a ghost. Just stories you hear over the years. Heavyweight. King shit. Bad arse. Red Laal… If there did exist a Pakistani Don Corleone, then this was him.’

Red Laal is the third novel from M Y Alam and has been ten years in the making. The book continues the story of Alam’s protagonist Khalil ‘Kilo’ Khan, who was first encountered in Alam’s award winning novel Kilo in 2002.

M Y Alam novels consistently chronicle the British-Pakistani experience in the same way that the works of Mario Puzo traced the Italian-American experience, through the lens of a self-regulating organised criminal network. In Kilo, we learnt of Khalil’s journey into a life of crime, how an innocent boy was transformed after witnessing a violent attack on his father by gangsters. Ultimately his progression through the criminal world allowed him to take revenge on his father’s attackers, but at the heavy price of a tormented soul.

Red Laal picks up the story ten years later, and we find Khalil at a low end, a small time drugs dealer desperately in search of his own salvation. The arrival of Laal Hussain, a Godfather figure of his father’s generation, lures Khalil back in to the criminal fold, but revelations of Laal’s hidden history and family connections make Khalil more determined than ever to escape the life of crime once and for all. A trip to Pakistan unlocks a wealth of secrets and leads to a showdown with Laal; two men plagued by their own demons and there’s only one possible way out.

M Y Alam’s novel is a compelling tale of survival, honour and family values; it is at once a page-turning thriller and homage to his home city of Bradford. In Kilo and Red Laal, Alam has created characters beyond compare in contemporary British fiction.

M Y Alam is the author of the novels Annie Potts is Dead and Kilo. He has published several short stories and is the editor of the acclaimed social history books Made in Bradford and The Invisible Village. During the day, he is a researcher and lecturer at the University of Bradford.