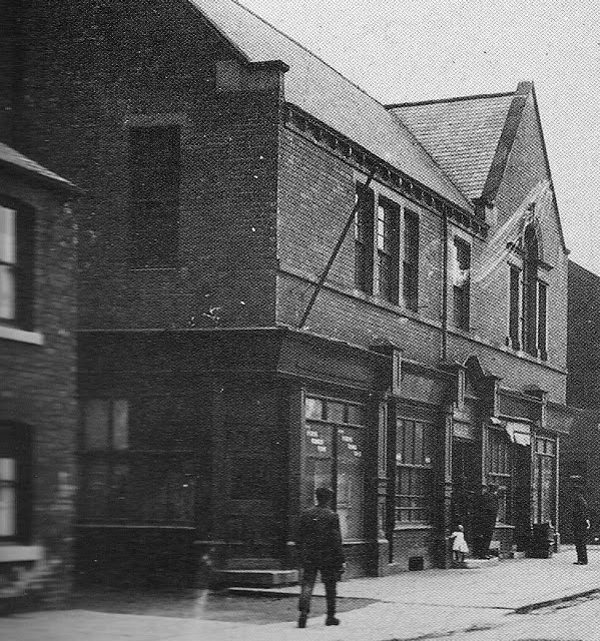 Featherstone Working Men’s Club, affectionately known as ‘t Green Lane’. It was built by its members in 1904 after they decided they no longer wished to support the Miners’ Welfare next door, which they saw as a Tory bosses club (the Welfare was owned and run by the pit owners).

Ian Clayton’s response to the Brexit Party media circus sweeping in to his home town of Featherstone, sowing seeds of division with a stage show of mass hypnotism.

As a seventh generation member of my family to make their home in Featherstone, I care deeply about where I am from. My partner Heather loves it here and my lad Edward is a son of this grand old town too. I hope my grandchildren and great-grandchildren will feel that same sense of belonging. I have an immense pride in the history of this town and judging by the sheer number of people who subscribe to the Featherstone Bygone Days page and share their own family history, photographs and ephemera, I’m not on my own in thinking that we have a town and a community to take justifiable joy and delight in. The history of this town is undoubtedly in its people, the stories they share, the clubs, societies and unions they belong to, the shops, pubs and clubs they use, the allotments and gardens they tend and the houses they take satisfaction from.

We are a town that has grown from hard work, but also let downs, setbacks and struggles. We always come back. The miners’ strike nearly ruined much of what we hold dear, but still we bounced back and though it’s hard at times, we still have much here to take pleasure in. The glue that binds us as a community holds strong. Better than that, it is a glue of are own making and that’s the best sort. I’ve always thought that Featherstone knows what it is doing, culturally, socially, and yes politically. We here believe in being good neighbours, helping those less fortunate and reaching out to include people who might feel left out.

Yesterday morning I watched a live stream of a Brexit Party rally from the Green Lane Club. It upset me. If someone had told me a year ago – no, just a week ago – that I would see with my own eyes people in a famous old Featherstone Working Men’s Club cheering Tories and right-wing extremists, and giving standing ovations to dodgy businessmen mouthing false camaraderie, I would have laughed them out of town. Yet it happened and it happened here, in the heart of a proper, working-class town. Surely this can’t be right and fair can it? I usually respond to this sort of thing with humour, but it’s got to the stage where it is not only too daft to laugh at, it is beyond satire, it has gone to a very dangerous and dark place. This is not a one horse, one party town, we must embrace the differing opinions of our neighbours, but dear me, this surely doesn’t mean we have to cheer those who wish to destroy community, sew the seeds of division and then drive off laughing having tricked, conned and humiliated us.

I wrote something on my Facebook page about what I saw. A good friend of mine from California wrote to me. Michael specialises in conflict resolution, he has worked in Northern Ireland and other parts of the world where communities have turned on one another. This is what he had to say.

‘The far right have consistently, if not intentionally, practiced what’s called reflective listening in the world of conflict resolution. They’ll knock on the door, listen to frustrations and then say something like, “We’re hearing that a lot. It’s irritating isn’t it?” Having acknowledged how someone feels and built some rapport, they then offer simple solutions to complex problems by scapegoating easy targets such as immigrants. It’s desperately depressing to witness such political entrepreneurs as Farage exploit so many people with lies and false comradeship.’

As I watched the circus yesterday, I tried to count how many lies the speakers were coming out with. I lost count. Yet people still cheered and held up the placards they had been given and were instructed to hold up at a given sign. I am thinking that this was a stage show example of mass hypnotism. Except the subjects were not embarrassing themselves by dancing to imaginary disco music and it wasn’t funny. It’s not funny anymore is it?

A reporter from The Guardian newspaper was there to witness this unedifying spectacle. His report in this morning’s paper makes for grim reading. I feel humiliated by it. I don’t want my town to be the place that contributed to the success of something as nasty as this.

When I wrote on my own Facebook yesterday, I asked, ‘What is the Green Lane Club thinking in allowing such a thing to happen on our own doorstep?’ To be fair to them, I have discovered since that they were duped and conned. When the original booking at the club was made, the organisers merely asked for a room to hold a seminar, they didn’t even mention the Brexit Party. The good people at the Club took the booking, because that’s what they do. They allow rooms to be rented for a small fee to help the club in hard financial times. It was only a few days ago that the real reason for the booking was revealed and by then the invoice had been paid and it was too late to do anything about. We Featherstonians must ask ourselves then, is this what we really want? A gang of tricksters and conmen making false bookings in order to get in by the back door and then continuing to try and fool us with their flashing lights, downright lies, false friendship, limp handshakes and grinning in our face. Featherstone does not deserve to be treated in this way.

I once asked my granddad if Mosley and his black shirts ever came to Featherstone. He laughed and said, ‘Aye, they once had a meeting at the back of the Central Club in a place called Teddy Edwards’ Market.’ I asked him what people did. He just laughed again and said, ‘Me and Lionel Anderson and our Harold and some others went up with a pick shaft apiece. We told them to get off home and I’m fairly sure they did.’ I am not like my grandad, I do not condone that approach, but I will fight with my words to ensure that my town continues a proud history of kindness to others and I refuse to be humiliated and shamed by here-today, gone-tomorrow clowns who know nothing of our rich and impressive history of fighting back.