Maureen Prest in conversation with Carl Gresham on BCB Radio, includes music related to her book King of Clubs. Carl Gresham also worked at Batley Variety Club back in the day. Click play below to listen. 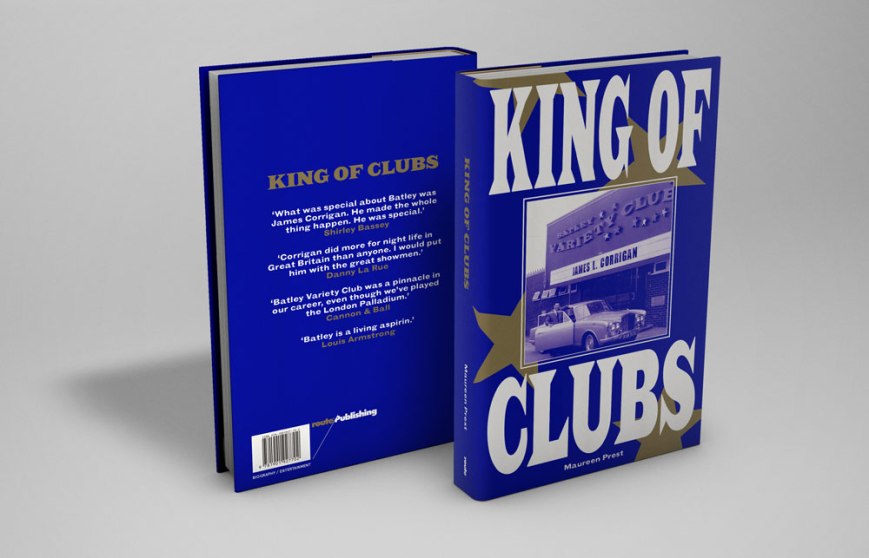 ITV’s Calendar feature on the launch of King of Clubs at Batley Town Hall, 24th March 2017.

For details of the book and more video footage of Batley Variety Club , see the King of Clubs website.

A feature on ITV’s Calendar previewing the book King of Clubs, with archive footage and author Maureen Prest talking about James Corrigan and the Batley Variety Club.

King of Clubs
by Maureen Prest

King of Clubs is a personal memoir of visionary showman James Lord Corrigan. Written by Corrigan’s confidant Maureen Prest, this is the only insider’s account of what really went on at his world famous Batley Variety Club, both in front of house and behind closed doors.

By bringing stars like Louis Armstrong, Shirley Bassey, Morecambe and Wise, Eartha Kitt and Gracie Fields to a humble mill town in Yorkshire, not only did Corrigan change the face of show business, he gave thousands of hard-working people something to smile about, a reason to put on the glad rags and be entertained. He was a showman extraordinaire and sprinkled stardust for all to share.

From his origins on a travelling funfair, his audacious climb through the world of show business, his turbulent marriage to his glamorous wife Betty, and his dramatic retreat, this is a story of rags to riches and back to rags. With a twist.

‘What was special about Batley was James Corrigan. He made the whole thing happen. He was special.’
Shirley Bassey

‘Corrigan did more for night life in Great Britain than anyone. I would put him with the great showmen.’
Danny La Rue

‘Batley Variety Club was a pinnacle in our career, even though we played the London Palladium.’
Cannon & Ball

Maureen Prest was the promotions and public relations manager for Batley Variety Club 1967-1974. She was a close friend and confidant of James Corrigan, the founder of the club. Maureen has worked as a theatrical agent, artist promoter and record producer. After leaving show business in 1974, she launched a successful fashion business with multiple outlets. Her book King of Clubs tells the amazing personal life story of James Corrigan.

King of Clubs will be released on the fiftieth anniversary of the opening of Batley Variety Club, 26th March 2017. Be amongst the first to read it. Click here to pre-order a signed first edition. Orders will be despatched upon publication.