‘Adult bedtime books don’t come much better than this with a series of short stories that explore desire, heartache, misunderstanding and envy. This is the 22nd short story instalment from Route. There’s a first person presence throughout and each story maintains a tranquil tone despite the passions explored. It begins with Pippa Griffin’s tale of teenage infatuation, Crush, a wonderfully evocative story of how when it comes to first loves, rose-tinted spectacles often cloud our emotions long after the original event, sometimes with ghastly consequences. Then there’s Chris Hill’s magnificent depiction of a loveless marriage where there’s no obvious culprit but a road accident causes the couple to confront their differing sensibilities. Regressing to childhood isn’t out of bounds either as Katherine Reed inhabits the world of a young boy coping with the divorce of his parents.

The manner in which each story carries such bountiful emotion over only a few pages makes this an ideal bedtime companion.’

Click here for more on The Route Book at Bedtime

‘The Route Book at Bedtime is the twenty-second instalment in Route Publishing’s series of contemporary short story collections: a slick presentation containing twelve stories which all take place at one of life’s threshold moments, in the liminal world between life and death, innocence and experience, love and loss. It is bedtime reading, and, in a way, the thread which pulls through all of the stories is that they are adult versions of the fairy tales which we’ve used to explain the world to children as we tuck them up under the duvet and kiss them on the forehead. These adult fairy tales feature bat caves and Snow White, skipping, dancing and coping with baldness. But there’s a darker side too; violence and death lurk in the background ready to strike, be it in the form of braining sheep with rocks taken from a dry stone wall or the death of a father.

Where the anthology really succeeds (and where many fall down) is in keeping an even tone throughout. Of course, this is due in no small part to the quality of the writing, but it also has a lot to do with editorial choice. There are no sleeping pills here; finish one of this dreamscape of stories, and the temptation is to move straight on to the next, perhaps pausing to set the alarm clock for just that little bit later in the morning.’

Read the review in full here

Click here for more details of Route Book at Bedtime

A series of small interviews with the authors featured in The Route Book at Bedtime has been posted on route-online.com The Route Book at Bedtime (Route 22) is a book of 12 stories that aims to capture those moments of deep emotional significance which return to us in our dreams. But what is the story behind the stories? In this feature, 10 of the authors talk about the inspiration behind the work. Here are a few samples.

M Y Alam on Smokes and Dust
I’d completed a draft while my father was in hospital for nearly three months. He recovered for a couple of months before relapsing. It’s not that I felt obliged to write anything about or even for him, but the love of the word was something he cultivated in me from an early age, sometimes without even knowing it. Unlike me, the writing was a much deeper part of who he was. Writing kept him alive, I used to think, but like everything else, even that left him. Barely able to hold a pen, he wrote his final poem, one of the most beautiful pieces of verse I’ve ever heard, a few days before he died.

Pippa Griffin on Crush
I wrote the first draft of ‘Crush’ during a two-week writing retreat in Devon. I was flicking through my notebooks and found notes for a story about a crush, and there was something there niggling at me, so I thought I’d better write it. I wrote the story quickly – ideas for Frances’s experiences coming quicker than I could write them down, memories of my own childhood crushes and how they felt never far away.

Sam Duda on The Parrot
I had just left a job, a girlfriend and a city, and gone to live in Cornwall. I scratched around for a while before finding a job on a beach. The only other worker was a Czech boy, Milan. I was anxious, self-aware and obsessive. He was carefree, hedonistic and unflappable. I drank with him all summer, trying to parrot him – not just to impress, but because it seemed an easier, more enjoyable way to live. The following year I moved to Newcastle and found myself slightly more carefree, hedonistic and unflappable. That’s when I wrote the story.

Cally Taylor on Imagination Avenue
‘Imagination Avenue’ was inspired by students using ‘For Sale’ boards to sledge down my street during one particularly snowy winter. They were so full of joy and glee they reminded me of children. I started to think about other occasions when I’d seen adults play – normally board games at Christmas – and the way even the most ‘grown up’ of faces lights up as they get lost in the moment. There’s something about playing that temporarily frees us from our day-to-day responsibilities and worries but, as adults, we’re far too self-conscious most of the time.

Click here for more on The Route Book at Bedtime

The Route Book at Bedtime (Route 22) is now available. The book is officially released in Spring 2010 but we have made advance copies available from our website should you like to get in their first. Always a special moment for us when we release one of these titles.

This title marks a full decade of the Route Series of Contemporary Stories. We’re very particular how we compile these titles, they are very close to our overall publishing ethic.  In some ways, I guess it is relatively easy to put together an anthology of stories, but to do it well and honestly is a very difficult task. The stories are selected in such a way as to try and reflect the current preoccupations of the day. It is the themes that emerge from our submission pile that determines the flavour of the book. We’ve been doing that for a whole decade now and the result – at least in my own mind anyway – is some kind of literary chronicle of the last ten years. The first title in this series was Introducing The Graphomaniacs (Route 1) which was issued in February 2000. At the time we were riding the wave of millennial optimism. Little did we know that less than two years later that bubble was about to burst in New York and we’d be plunged into the darkness of the War on Terror, military invasions and social paranoia creeping into our own communities. Social and technological change continued at a rapid pace in an artificial boom, changing the way many of us live our lives. And then the banks melt down and the economy drops through the floor as a consequence.  It’s been quite a time.

We hope the series throughout the last ten years has captured an element of living through these times at a human and social level.  As the decade moved to its end, we marked the election of Barack Obama, and a new a wave of optimism, with the publication of Born in the 1980s, a book which looks to the future and a new generation to take over. The Route Book at Bedtime is an apt conclusion to this period in our history, time for bed and reflection. We’re very proud of this one, it’s a good mixture of the familiar and the new and I hope you get chance enjoy it.

Click here for more details and to order a copy.

All stories submitted for The Route Book at Bedtime and Contemporary Short Stories have now been read. We received 340 submissions, from which we longlisted 40 stories, which is now down to a shortlist of 20. All writers who have been notified. You can see a photograph of the submission pile here.

We genuinely sorry that we couldn’t include more stories, it was a rich bunch. As always the reading process was a moving and humbling experience. Several themes emerged from the reading: there was a wealth of stories concerned with relocation after a relationship had broken down; there was also a strand of fathers with daughters coming of age and the hurt they felt when the light of their life’s attention turns to boys. Most of all the stories once again revealed the difficulties in finding and keeping love. For the first time in several years there was no explosions on trains, no terror in cities, no mistrust between different cultures on the streets. Maybe the psychological terror brought on by our former guardians is finally lifting. 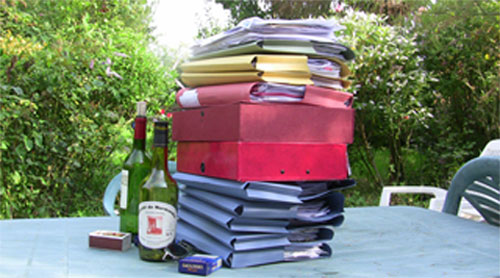 Submissions stack for Route 22. If you sent in a story for The Route Book At Bedtime or Contemporary Stories category, then it will be in here somehwere. There’s 340 short stories buckling that garden table. Once again, the intense reading retreat has been both epic and humbling. June 2009